The Centzon Totochtin(sometimes called "the Rabbit") is a relic from the past, possessed and hidden by Hoody in the Commune outside of Romdeau. It is a sort-of Sailboat, capable of traveling on land due to some sort of repulsor technology that lifts it above the ground. It is completely powered by the wind, including the electrical power to lift it, and supply lighting in the interior. 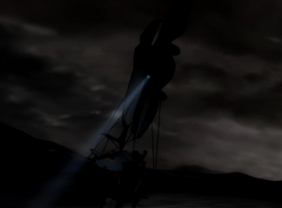 The Centzon is first mentioned in Episode 4 "Signs of Future, Hades of Future/Futu-Risk," alluded to by Hoody who has hidden it. It is later discovered by Quinn upon learning of the death of her son. Quinn then uses it to escape from the patrol drones sent from Romdeau to wipe out the Commune. It accompanies Re-L Mayer, Vincent, and Pino throughout their entire journey.

Retrieved from "https://ergoproxy.fandom.com/wiki/Centzon_Totochtin?oldid=5683"
Community content is available under CC-BY-SA unless otherwise noted.