Back to page
Add topic

Eh nice edit but your info is a bit flimsy considering the only time Re-L speaks to Daedalus in the footage was when she was a teenager and Daedalus could easily be alive then, while still being younger than her. Also the fact she has no genetic inheritance to her grandfather seems a bit off, I never picked up on such a hint. By this point in time Humanity had mastered the human genome, for all intents and purposes she isn't naturally the grand child of Donov. But it would make sense for them to actually leave some genetic aspects instead of just keeping it a more of a social thing. But yeah the thing about Re-L being a growth accelerated clone is something that simply lacks real concrete evidence, not to mention just doesn't make much sense in any regard. Look at Real and look at Re-L, one has free will and the other doesn't. One is literally Daedalus' slave and the other isn't. Not to mention you could consider what Raul says to Daedalus when he sees Real after being growth accelerated, he's quite baffled by it, making it seem that growth acceleration is something that doesn't occur often at all in Romdo.--KercKasha 02:18, January 9, 2010 (UTC)

It's been a while since I've watched that part. I knew she addressed Daedalus growing up, but I have no idea at what phase. Good point.

In episode three (?), when the Chorus is getting annoyed with how curious Re-L is, someone makes a remark like "wonder who she could take after" and another goes "that's irrelevant, because it's all based on..." I don't remember the words exactly, but my understanding of the translation was that genetic material wasn't being passed down to family members.

Maybe I understood it wrong? What's your take on that part?

I took it at face value. Genetically they are based around what the city needs at the time but there's a lot of aspects of a person that do NOT come from genetics but rather your environment. Which is why I had figured she did in fact actually have parents and they were just as rebellious as she was. You can still have genetic heritage in other forms without sacrificing the whole genome aspect.--KercKasha 03:07, January 9, 2010 (UTC)

Actually, Re-l addressed Daedalus as a child - maybe around the eleven/twelve year mark. The idea of Re-l being a force-grown clone does lack concrete evidence, but it's still possible that some part of her genetics was taken from Monad. Re-l herself remarks during the final episode, "All Grandfather ever wanted was to meet the Creator. Even if that was the only reason I was born..." suggesting that she suspects she was created to draw Ergo back to Romdo, in which case it would make perfect sense for part of her, genetically, to come from Monad. Also, considering the almost-complete failure of the ADW Project (90% mortality rate), which appears to be the infusion of Romdo's citizens with Amrita cells, the fact that Amrita cells helped Re-l to heal would seem to suggest that she is connected genetically to the Proxies. Food for thought.

And the exchange about genetics runs thus: "Her intuition is far too keen." "I wonder who she must take after." "The citizens are all modelled on pre-arranged information. Local approximations are meaningless." That is, it doesn't matter who the citizens are (supposedly) related to. Production is almost completely controlled. Bear in mind that while environment does have an effect on who we become, in Romdo that's also pretty tightly controlled. There's not a lot of room for difference in a domed city - in this one, at least. Also, there's no evidence that the child granted to any given couple is actually related to them genetically. Or not, of course, but again - food for thought.

Just on a general note, can I request that we stick to what we do actually know just for now? Once we've got down what we know or can easily infer (and by easily, I mean that we have an actual line to refer to or something similar), then we can discuss our speculations. We don't have any concrete information about Re-l's parents or if she had any in the first place, so let's let the subject lie for now.--ReadingChick 08:08, January 9, 2010 (UTC)

Wait a sec. Amrita cells and ADW project? Where'd you pick that up I can't remember the two ever being linked. Then again I frankly have little idea about the project at all, I thought it had something to do with replacing the WombSys with regular births.

As for leaving speculation lie, that is fair enough. Which is why I kept the whole thing about her parents in the article as mere speculation based on things that I actually know rather than just straight up saying it.--KercKasha 09:22, January 9, 2010 (UTC)

Shoot. Now I can't remember whether I watched it or read it somewhere... Alright. Let me logic this one out. The ADW Project was definitely designed to somehow change humans so that they could live without the Proxies. The obvious thing that the Proxies are needed for is the Wombsys, because the humans can't reproduce on their own. If you want to remove the Proxies from the equation, that means that you somehow have to render a previously sterile population fertile, or else make humans immortal. (If the second, involving the Amrita cells is a given.) Since Raul was talking about manifesting change "on the cellular level", which is not an easy (or pleasant) thing. I think this probably makes more sense in my head, but they may have tried to use Amrita cells to counteract the negative effects in the same way Daedalus used them to help heal Re-l when she was sick, which either failed or made things worse. ...Yeah, I think it made more sense in my head. Disregard, if you like.

I know, and I appreciate that. But I think it would be better just to leave it out of the articles entirely at this point.--ReadingChick 21:19, January 9, 2010 (UTC)

Query; that comment about Daedalus being younger than Re-l. Where does that come from?--ReadingChick 12:42, January 11, 2010 (UTC)

The fact he looks like a little kid. That and the whole idea that his raison deitre(sp?) is to protect Re-L and the Proxy. And reasons for being are quite literal in the world of ergo proxy, he was created to make sure Re-L grew up in good health. At least that's how I interpreted it.--KercKasha 12:56, January 11, 2010 (UTC)

That doesn't mean that he is younger, it just means that he looks young. I think there might have been a shot of his citizen profile in one of the episodes - perhaps we should see if that has his age on it. Raison d'etre is the spelling that you're looking for (actually it should have a little hat thing over the first e, but I'm not sure how to make that show up). And if he was meant to make sure that Re-l grew up in good health, wouldn't it make more sense for him to be the elder?--ReadingChick 13:03, January 11, 2010 (UTC)

No no no I'm thinking on the basis that his entire existence is due to her. That is she was born, then he was born to protect her. I realize he could just look young and I never meant to insinuate that there was a significant gap between Re-L and Daedalus. I just assumed that while he does in fact look young for his age (which is noted a few times by characters), Re-L was still older, by at least a year or two. This is just guess work and it really doesn't matter in the grand scheme of things.--KercKasha 13:08, January 11, 2010 (UTC)

Probably not, but it's fun to discuss, don't you think? :) I don't think that her being the reason for her existence necessarily means that she has to be older. Citizen production in Romdo is controlled, right? Therefore, they planned Re-l's creation. Therefore, they could also plan the creation of someone to be her guardian.--ReadingChick 13:12, January 11, 2010 (UTC)

Well it's going under my assumption of the parent theory. They buggered off for whatever reason while she was still young and it's not like Donov could care for her. AutoReivs, probably Iggy in this instance, could probably pull it off but you need a human touch in some regards, hence why Daedalus and Re-L are childhood friends. She doesn't seem like the sociable type either but this is just theory crafting on my part, which i seem to have a nack for.--KercKasha 13:16, January 11, 2010 (UTC) 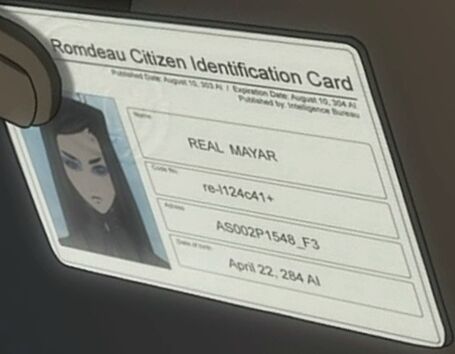 Whoa I didn't think to freeze frame that. The October sixth came from the MySpace page that was put up by marketting I assumed because they actually bothered to put it there that it was canon. Well there you go, April 22nd 284 AI, wonder what the AI stands for. KercKasha 07:21, November 4, 2010 (UTC)
Also I'd ignore the spelling of her name there as it seems to be one of the inconsistencies throughout the series but it's generally accepted that her name is spelt Re-L Mayer, pronounced 'Rielle'. While Real Mayer is the monad clone in the likeness of Re-L. KercKasha 07:32, November 4, 2010 (UTC)
I was just about to comment on that ^_^ It makes me question the validity of any information that is acquired directly through the animation, including the supposed birth day. As for what A.I. could stand for (purely speculating) Adeo Ideo? the undertaking of purpose?Grammar Proxy 07:42, November 4, 2010 (UTC)

Considering we've gotten evidence of Re-L's year of birth can we finally get rid of the idea that Re-L was a growth accelerated human? It's heavily implied throughout the series that Daedalus and Re-L were childhood friends which is why he was present in one of the videosKercKasha 08:06, November 4, 2010 (UTC)

Actually I'm not sure that Re-L can be definitly called Monad's clone. I think that the similarity in appearences of Real and Re-L is explained by Daedalus's fondness to Re-L - he wanted Real to look like Re-L. I don't think that Donob needed to clone Monad, because he already had the original one, and Proxy One wasn't attracted by that. Also, Daedalus doesn't seem to have chance to study Monad before she escaped, or he would've created the FP bullets much earlier